Teaching Our Children to Pray 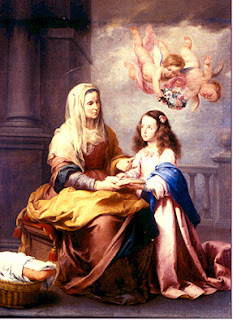 In our modern society, people like to pride themselves on being hip, cool, and atheist. For some atheists, their parents were atheists. But for others, as they were growing up, their parents did not want to “impose” their belief system (religious or otherwise) on them. Like picking their favorite candies out of a chocolate box, the parents wanted their children to wait until they were old enough to  decide which flavor they liked best: Catholic, Methodist or Evangelical. Except handing on the faith is not like picking out the caramel nougat versus the vanilla flavor one. And if they never decide, so be it–except that church weddings are a bit more fancy. Never mind that the parents would be horrified if the child decided to never take a bath or brush his teeth. Never mind that without faith the basis for a value system of right and wrong is always shifting. Why is honesty important? Why should I tell the truth?

Catholic Exchange
Posted by Elizabeth at 4:05 AM 3 comments: