Huge Paris Protest: Defending Marriage Between a Man and a Woman 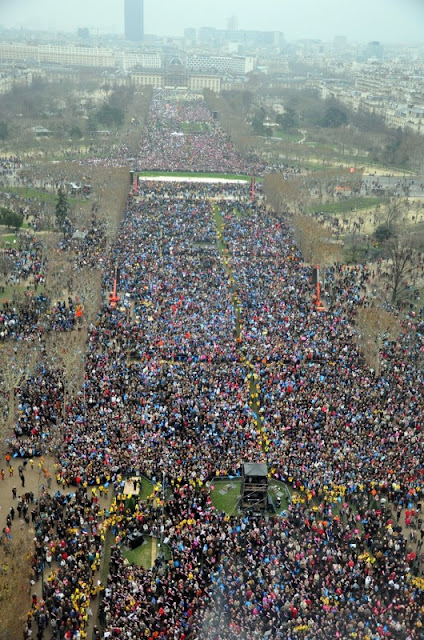 
On the Feast of the Holy Family, January 13, 2013 thousands surged into Paris. Over 1 million (new estimates are 1.3 million ) people, Christians, Jews, Muslims and atheists, came out in support of marriage between a man and a woman. The picture only shows one direction. There were three separate routes meeting at the Eiffel Tower and the flow of people was constant from early morning until late at night. Not only were the crowds incredibly enormous, but they included an unusual combination of groups, homosexuals, social conservatives and the Catholic church. One of the main organizers of the event, "Frigide Barjot," (stage name) a French comedian, said, "those against gay marriage are multicultural, multi-religious, multi-philosophical and multi-sexual." Of course, don't expect the mainstream media to admit to the numbers. Just look at the pictures and watch the videos.

What's all the ruckus? They were protesting President Francois Hollande’s pledge to legalize gay marriage and allow same-sex couples to adopt children. Protestors waving pink, blue, and white flags with a mother, father and child, as well as many others carrying pro-family posters, began from 3 different points (each group carrying a different color) and came together at the Eiffel Tower. Read the story at Rorate-caeli, thinkinghousewife.com, Galliawatch, Galliawatch and rt.com.

You can read an eyewitness account at Protect the Pope. National Organization of Marriage --a French group, also has many more photos. Lots of photos on Le Parisien, where you can see the three separate colors. And more photos at Toronto Sun.

NCRegister had an interesting related article about France banning the words "mother" and "father."

For the slanted media, this one gets most of the facts ABC News (Australia) but much of the mainstream media totally ignored this, did not show the massive crowds of people, used it to advertise other stories sympathetic to gays, or distorted the story.

Here are two fair stories from the press, Concord Monitor and TimesLIVE

First Things  has an article about other gays opposing gay marriage.


Pictures below from the Thinking Housewife and Galliawatch 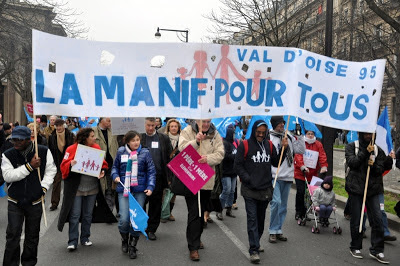 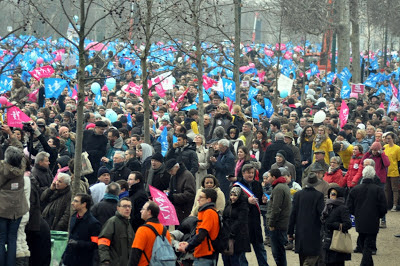 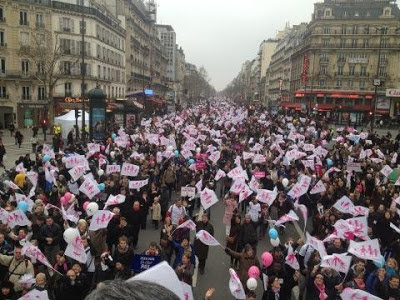 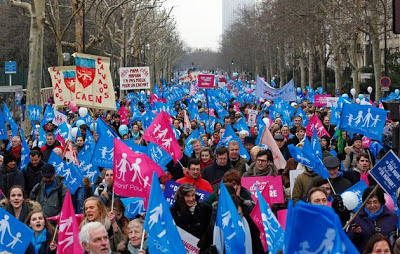 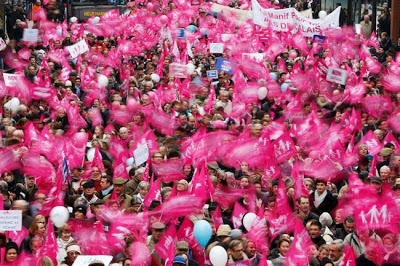 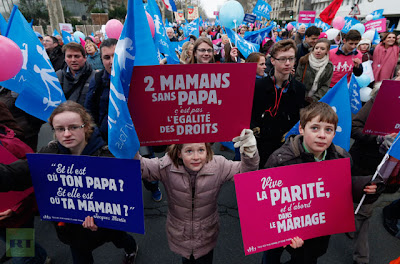 The signs are translated as “Where is your daddy, where is your mommy,” “Two mothers without a father, that’s not equal rights,” and “Long live equality, firstly, in marriage.”